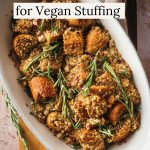 Are you looking for the best recipes for vegan stuffing? I’ve got you covered! Everyone wants to have the best vegan stuffing for Thanksgiving. I mean, why wouldn’t you? Whether you follow a plant-based diet or are looking for a delicious vegan thanksgiving dressing for a visiting friend or family member, you’ve come to the right place!

What is vegan stuffing made of?

Vegan stuffing ingredients can vary depending on the recipe, but there are some standard ones.

Are stuffing and dressing the same thing?

Yes and no. Stuffing recipes for Thanksgiving are traditionally “stuffed” into something, usually a dead turkey. On the other hand, dressing is made in a pan and baked on its own with no animal involved. (Though traditional thanksgiving dressing recipes don’t usually use vegetable stock so they aren’t vegan or vegetarian by nature.) Dressing can also be made on the stovetop so baking is optional whereas stuffing is baked (technically speaking).

I’ve searched high and low and tried several vegan Thanksgiving dressing recipes, so you don’t have to. When it comes to vegan stuffing recipes for Thanksgiving, I say why not add some protein? This way, it can be a meal all on its own. (I know I’m not the only one that does this.)

The following six dressing recipes are the best I have tried, all utilizing different protein sources depending on your preference and what you have on hand. There are a few that are baked and one that is made on the stove.

I created a classic vegan stuffing recipe with quinoa that is drool-worthy so it’s definitely at the top of my list. (I recently added new photos and step-by-step videos to this recipe too!)

This vegan thanksgiving dressing calls for nine wholesome ingredients including quinoa for added protein leaving you satisfied for longer. Also, with the added quinoa I am 100% ok with calling this recipe for vegan stuffing a meal all on its own. That’s a win-win if you ask me! On top of that, this vegan dressing recipe only takes 20-minutes of prep leaving plenty of time for other cooking adventures!

This easy holiday recipe is made with the most delicious plant-based ingredients and comes out nice and crispy every time. The best part, it had absolutely no relationship with a bird’s ass. You’re welcome.
– Rae

This gluten-free and vegan stuffing was created by Lexi and Beth the mother and daughter duo behind the blog Crowded Kitchen. This gluten-free dressing is full of flavor and simply tastes like Fall.

It does call for fifteen ingredients and require 40-minutes of preparation so it may seem a bit overwhelming to some. However, the instructions are clear and helpful. There are even step-by-step photos and extra tips so you can really nail this gluten-free dressing recipe.

If you’re looking for the best gluten-free stuffing recipe for Thanksgiving this year or just for dinner, this recipe is for you!

“This Classic Gluten-Free Stuffing is a family recipe that we’ve been making for years and have adapted to make celiac-friendly, vegan, and dairy-free. Such a delicious and comforting addition to your holiday menu!”
– Lexi

Are you looking for a vegan stovetop dressing instead? This easy vegan stovetop stuffing by Caitlin from the blog From My Bowl calls for just nine classic ingredients making it very approachable. Many of these ingredients are pantry staples so you might have everything you need on hand. So, if you’re thinking about using that box of stovetop stuffing this year, don’t. Make this easy thanksgiving dressing recipe instead.

“This easy stovetop stuffing is a healthy AND time-efficient twist on the classic holiday recipe.”
– Caitlin

If you are looking for a vegan dressing to incorporate mushrooms into, this one is for you! This vegan mushroom stuffing was created by Taavi of the Healthienut. This vegetarian mushroom stuffing has the perfect amount of crunch and is perfectly flavored with fresh rosemary, thyme, and sage.

“Toasty chunks of fresh bread tossed in a flavorful mushroom broth with notes of fresh sage, rosemary, and thyme.”
– Taavi

This easy vegan stuffing by Brandi of the The Vegan 8 is delightful. It calls for nine ingredients and takes under two hours to make with just 30-minutes of prep. Its secret ingredient is pecans! Who doesn’t love pecans!? I have used pecans as “meat” before in recipes and they add the perfect texture and protein to this recipe. That being said, pecans can be difficult to find or pricey. However, walnuts work just as well and make this vegan stuffing for thanksgiving just as delicious!

This Easy Vegan Stuffing is made like the classic breaded version but without any meat and is also oil-free and dairy-free. It is made with just 8 simple ingredients and a few easy steps!
– Brandi

Remember, whether you’re an experienced cook or this will be your first vegan thanksgiving, you’ve got this!

If you try any of these recipes, let me know! Leave a comment and remember to take a picture and tag it #raepublic on Instagram! I’d love to see what you come up with. Cheers, lovely!

Looking For Something Else?